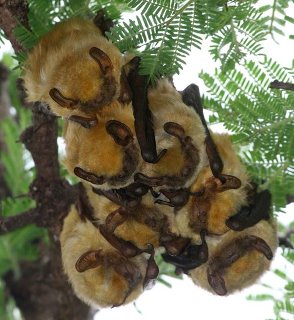 The Variegated Butterfly Bat (Glauconycteris variegata) is a species of vesper bat.  It is sometimes called the leaf-winged bat, or simply the butterfly bat.  The variegated butterfly bat is found in many forested, savanna, and bushveldt habitats south of the Sahara desert.  It is found in a narrow band of territory running from Senegal in the west as far as southern Ethiopia and Somalia in the east, and in much of southern and eastern Africa outside the tropical rainforest, as far as northern Namibia, Zimbabwe, and South Africa.

Variegated Butterfly Bats are relatively small, averaging 10 centimetres (3.9 in) in total length, with a 4.7 centimetre (1.9 in) tail, and weighing around 11 grams (0.39 oz).  Females are slightly larger than males, with an average wingspan of 32 centimetres (13 in), compared with a typical male wingspan of 31 centimetres (12 in).  The body is covered in long, silky fur of highly variable color, although usually yellowish or light grey, and lacking the prominent patterns found on some closely related species.  The fur on the undersides is white or very pale grey, and that on the face and ears is brown.  The wing membranes also have a sparse covering of hair, and have a distinctive reticulated pattern of dark veins, from which the bat takes the first part of its name.  The bat has a domed head and a short snout with a deep groove running between the nostrils.  The lower lip is large and padded, but the upper lip has a simpler appearance, without any of the folds seen in some other bat species.  The ears are relatively short, with a small tragus.  The wings are long and narrow in shape, suggesting that the bat is agile in the air, but is not efficient at high speed flight.

Variegated butterfly bats are nocturnal, spending the day roosting in trees in small groups of up to ten individuals.  Unlike many other bats, they do not wrap themselves in their wings while roosting.  During the night they forage for flying insects, especially moths,in open terrain, close to the ground or above open water.  There is a single breeding season each year, which occurs during the winter.  The exact timing of the breeding season varies widely across the range, based primarily on latitude, ranging from December in the north to August in the south. A single young is born after a gestation period of about three months, and is weaned before the age of two months.