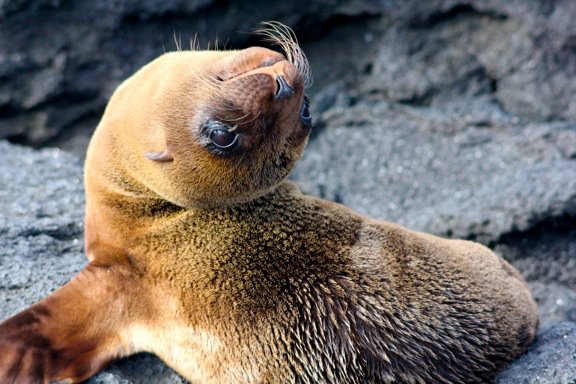 The Galápagos Sea Lion (Zalophus wollebaeki), a species of sea lion, exclusively breeds on the Galápagos Islands and, in smaller numbers, on Isla de la Plata (to Ecuador).  Being fairly social, and one of the most numerous species in the Galápagos archipelago, they are often spotted sun-bathing on sandy shores or rock groups, or gliding gracefully through the surf.  Their loud bark, playful nature, and graceful agility in water make them the unofficial “welcoming commitee” of the islands.

Galapagos Sea Lions are slightly smaller than their Californian cousins.  Adult males (bulls) are the head of the colony.  Bulls grow to be up to 7 ft (2 m) in length and 800 lbs (363 kg).  As males grow larger they fight to win dominance over their territory, including his own personal group of between 5 and 25 cows.  Dominant bulls will fight off any intruders entering his territory.

Each cow in the group has a single pup born one year after conception.  The pups have a strong bond with their mother, and the cow will nurture a pup for up to three years.  In that time the cow and the pup will recognize and be able to distinguish eachother’s bark from the rest of the colony.  The mother’s will take the young pups with them into the water while nursing.  When the pup is 2 – 3 weeks old, the cow will mate again.

Within the colony sea lion pups live together in a rookery. Pups can be seen together napping, playing, and feeding. It is common to see one cow ‘baby-sitting’ a group of pups while the other cows go off to feed.  Here we see just how playful these little pups can be.  Kayaking with these pups is often the highlight of any trip to the Galapagos Islands.