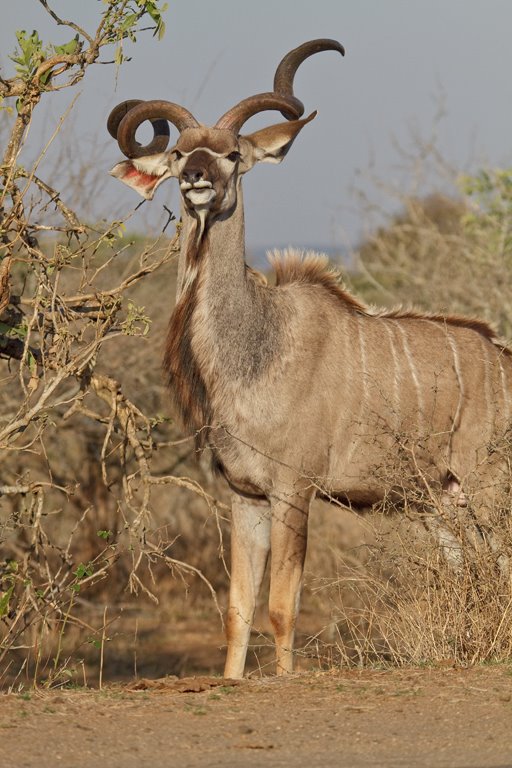 The Greater Kudu (Tragelaphus strepsiceros) is a woodland antelope found throughout eastern and southern Africa; towards the east in Ethiopia, Tanzania, Eritrea, Kenya, and in the south, Zambia, Angola, Namibia, Botswana, Zimbabwe and South Africa.  Greater Kudus have a narrow body with long legs, and their coats can range from brown/bluish-grey to reddish-brown.  They possess between 4–12 vertical white stripes along their body. The head tends to be darker in color than the rest of the body, and exhibits a small white chevron which runs between the eyes.

Male Greater Kudus tend to be much larger than the females, and vocalize much more, utilizing low grunts, clucks, and humming noises.  The males also have large manes running along their throats, and large horns with two and a half twists.  The horns do not begin to grow until the male is between the ages of 6–12 months, twisting once at around 2 years of age, and not reaching the full two and a half twists until they are 6 years old; occasionally they may even have 3 full turns.  Males weigh 420–600 lb (190–270 kg ), with a maximum of 690 lb (315 kg), and stand about 71 in (180 cm) tall at the shoulder.  Females weigh 260-46- lb (120–210 kg) and on average stand 47 in (120 cm) tall at the shoulder; they are hornless, without a beard or nose markings.

The Greater Kudu’s habitat includes thick bushveld, rocky hillsides, dry riverbeds, and anywhere with a constant water supply.  Their diet consists of leaves, grass, shoots and occasionally tubers, roots and fruit.  During the day, Greater Kudus normally cease to be active and instead seek cover under woodland.  They feed and drink in the early morning and late afternoon, acquiring water from waterholes or roots and bulbs which have a high water content.  Although they tend to stay in one area, the Greater Kudu may search over a large distance for water in times of drought.

When a herd is threatened by predators, an adult (usually female) will issue a bark to alert the rest of the herd.  Predators of the greater Kudu generally consist of Lions, Leopards, and hunting dogs.  Although cheetahs also prey on Greater Kudus, they are unable to bring down a mature male like this guy, and usually go for the more vulnerable females and offspring.  Despite being very nimble over rocky hillsides and mountains, the greater kudu is not fast enough to escape its main predators over open terrain, so instead relies on leaping over shrubs and small trees to shake off it’s pursuers.

Female Greater Kudus (cows) live in small herds of six to twenty along with their calves.  Males (bulls) tend to be remain solitary, but they sometimes form bachelor herds that consist of four to eight young males.  Fully mature males will often fight other males by interlocking their horns until one of them admits defeat.  In rare circumstances, this can result in both males being unable to free themselves from the other’s horns, often resulting in the death of both animals.  These magnificent horns are sometimes used to make Shofars (used in traditional Jewish ceremonies).