The Eye of the Rhino 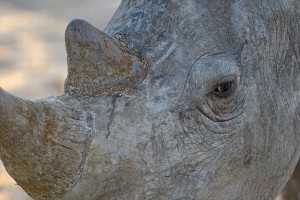 The White Rhinoceros or Square-Lipped Rhinoceros (Ceratotherium simum) is one of the five species of Rhinoceros that still exist.  It has a wide mouth used for grazing, and is the most social of all rhino species.  The White Rhino consists of two subspecies: the southern white rhino (Ceratotherium simum simum, pictured here), and the much rarer Northern White Rhino (Ceratotherium simum cottoni).  The population of Southern White Rhinos is about 14,500, making them the most abundant subspecies of rhino in the world.  However, the population of the second subspecies, the critically endangered Northern White Rhinoceros, is down to as few as four individuals in the wild, with the possibility of complete extinction in the wild having been noted since June 2008.  Six are known to be held in captivity, two of which reside at the San Diego Zoo.  There are currently four born in a zoo in the Czech Republic, which were transferred to a wildlife refuge in Kenya in December 2009 in an effort to have the animals reproduce and save the subspecies.

The White Rhino has an immense body and large head, a short neck and broad chest.  This rhino can exceed  7,700 lb (3,500 kg), have a head-and-body length of 11-15 ft (3.5–4.6 m) and a shoulder height of 5.9-6.6 ft (1.8–2 m).  The record-sized white rhinoceros was about 10,000 lb (4,500 kg).  On its snout it has two horns.  The front horn is larger than the back horn and averages 35 in (90 cm) in length and can reach 59 in (150 cm)!  The white rhinoceros also has a prominent muscular hump that supports its relatively large head.  The color of this animal can range from yellowish brown to slate grey.  Most of its body hair is found on the ear fringes and tail bristles, with the rest distributed rather sparsely over the rest of the body.  White Rhinos have the distinctive flat broad mouth which is used for grazing.

The White Rhino receives its name not from it’s color (which is actually more Grey than White), but from the Dutch settlers that gave it the name “Whyde”, meaning wide, referring to the animals square mouth.  Confusion in translation then led to the to the name White being used.  Interestingly, “Black” Rhinos aren’t really black at all, in fact they are basically the same color as white Rhinos.  They can be distinguished by a characteristic hook nose, as opposed to the square nose of the “White” Rhino.