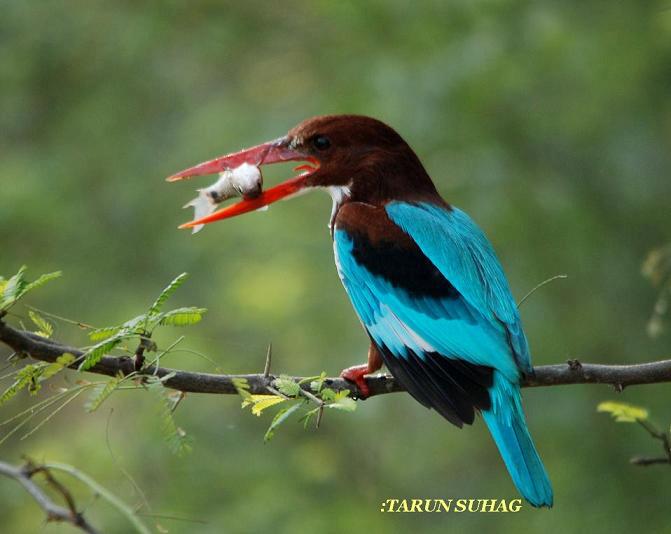 The White-throated Kingfisher (Halcyon smyrnensis) also known as the White-breasted Kingfisher or Smyrna Kingfisher, is a tree kingfisher, widely distributed in Eurasia from Bulgaria,Turkey, east through South Asia to the Philippines.  White-throated Kingfishers as a group eat a wide range of food, but each bird may specialize in a particular prey.  They obviously like fish (particularly during the wet season), but other prey make up the bulk of their diet.  While hunting along the water, they prey on crabs, amphibians (frogs) and reptiles (skinks, lizards). On land, they hunt large insects and arthropods (grasshoppers, beetles, termites, scorpions, centipedes). They beat these against their perch to kill and remove venomous stings. They even take small mammals (rats, mice, voles), snakes up to 65cm long, and nestling birds.   They basically eat any prey small enough for them to take.  White-throated Kingfishers dive to catch aquatic prey; in shallow water, they enter feet first, in deeper waters, head first.  They dive similarly into grass and vegetation to catch terrestrial prey.  They can hover over their target area for a short while before plunging in.  Their hunts appear to be more successful in wetlands than on dry land.  The White-throated Kingfisher hunts alone, but where hunting is good, they may perch as close as 100 m apart without showing much hostility.