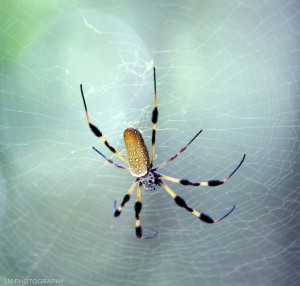 The Golden Silk Orb-Weavers (Nephila) are a genus of araneomorphs (spiders with fangs that cross instead of lying parallel) noted for the impressive webs they weave.  The gold in their name actually refers to their yellow tinted web that many say resembles thin strands of gold.  Weaving a sunlit web enables the spider to ensnare bees that are attracted to the bright yellow strands, and at the same time in shady spots the yellow blends in with background foliage that acts as a camouflage.  The spider is able to adjust pigment intensity relative to background light levels and color of the foliage around it; the range of spectral reflectance is specifically adapted to insect vision.

Nephila consists of numerous individual species found all around the world, and they are commonly referred to as golden orb-weavers, giant wood spiders, or banana spiders.  In North America, the golden silk orb-weavers (Nephila clavipes, pictured here) are sometimes referred to as writing spiders due to zigzag patterns they occasionally build into their webs.  Nephila spiders vary from reddish to greenish yellow in color with distinctive whiteness on the cephalothorax and the beginning of the abdomen.  They have striped legs and their tips point inward (rather than outward as is the case with many wandering spiders) facilitating their web making.

Golden orb-weavers reach sizes of 1.5 – 2 inches (4.8 – 5.1 cm) in females, not including legspan.  Males usually only reach an inch (2.5cm).  The largest specimen ever recorded was a 2.7 inch (6.9cm) female N. clavipes from Queensland, that was able to catch and feed on a small-sized finch.  Species from Taiwan have been said to reach over 5.7 inches in mountainous country.  Golden silk orb-weavers are widespread in warmer regions throughout the world, with species in Australia, Asia, Africa, and America.  N. clavipes (pictured her) occurs in the United States of America, where it ranges throughout the coastal southeast and inland, from North Carolina to Texas.  Nephila spiders are the oldest surviving genus of spiders, with fossilized specimens found going back 165 million years.

The contrast of dark brown/black and green/yellow warns potential predators that this little guy packs a hefty dose of venom.  The venom of the golden silk orb-weaver is potent but not lethal to humans.  It has a neurotoxic effect similar to that of the black widow spider, however, its venom is not nearly as powerful.  The bite causes local pain, redness, and blisters that normally disappear within a 24-hour interval.  In rare cases, a bight might trigger allergic reactions and result in respiratory troubles (in asthmatics) or fast-acting involuntary muscle cramps.  As the genus possesses relatively strong chelicerae (fangs), the bite could also leave a scar on hard tissue (such as fingers).