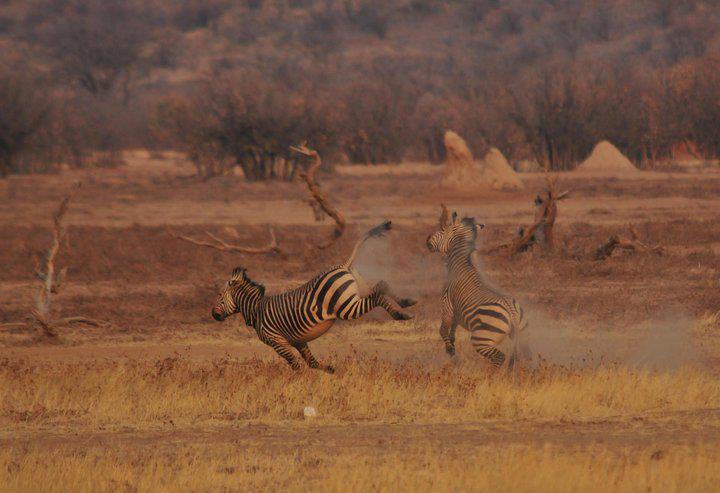 The Mountain Zebra (Equus zebra) is a threatened species of equid native to south-western Angola, Namibia and South Africa.  It has two subspecies, the Cape Mountain Zebra (E. z. zebra) and Hartmann’s Mountain Zebra (E. z. hartmannae, pictured here), though it has been suggested these should be considered separate species.  Groves and Bell found that the Cape mountain zebra exhibits reserve sexual dimorphism, with larger females than males, while the Hartmann’s mountain zebra does not.  The black stripes of Hartmann’s mountain zebra are thin with much wider white inter-spaces, while this is the opposite in Cape mountain zebra.  Like all zebras, it is boldly striped in black and white, and no two individuals look exactly alike.  The stripe can be black and white or dark brown and white.  Their stripes cover their whole bodies except for their bellies.  They can live for up to three days without drinking water.

The species is listed as Vulnerable under the IUCN Red List.  The Cape Mountain zebra was hunted to near extinction with less than 100 individuals by the 1930s.  In 1998 it was estimated that approximately 1,200 Cape mountain zebra survived, of which around 542 occurred in national parks, 491 in provincial nature reserves, and 165 in other reserves.  However the population has increased to over 2,700 in the wild due to conservation efforts.  Both Mountain zebra subspecies are currently protected in national parks, but are still threatened.  There is a European zoo’s Endangered Species Program for this zebra as well as co-operative management of zoo populations worldwide.  The main threats to the species are from loss of habitat to agriculture, competition with domestic livestock, hunting, and persecution.