Their necks on the line from poaching and habitat loss, giraffes in west Africa are being fitted with satellite-tracking collars in a bid to help conserve their numbers.

Threatened giraffes in west Africa have been equipped with satellite collars for the first time in a bid to protect the species. Eight animals were last week fitted with the GPS-tracking collars in Niger as part of a £25,000 research project funded by the British Giraffe Conservation Foundation (GCF).

A giraffe being fitted with a collar. 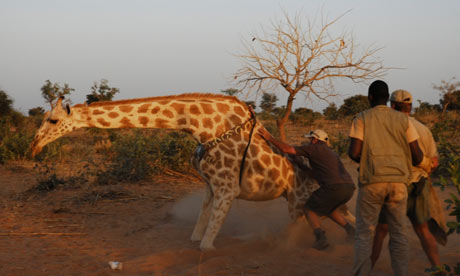 A giraffe struck and killed by a plane.