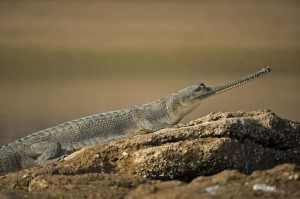 Gavialis gangeticus is known more commonly by two names, the Indian Gavial and the Indian Gharial.  The name Gharial comes from the bulbous protruberance found on mature males, called Gharas.  They are found in the northern part of the Indian subcontinent, in the Brahmaputra, Irrawaddy, Bhima, Ganges, Mahanadi, and Kaladan river drainages of Pakistan, India, Nepal, Bangladesh, Bhutan, and Burma.

The Indian Gharial is the only remaining member of the once prominent family, Gavialidae, a long established group of Crocodilians with long skinny snouts.  Gavialoids are the most specialized of all Crocodilians, and their slender snouts are perfectly evolved for catching fish in fast moving rivers.  The fossil history of the Gavialoidea is quite well known, with the earliest examples emerging around in the late Cretaceous period.  The earliest Gharial may have been related to the modern form, but some forms died out around the same time as the dinosaurs, while others survived until the early Eocene.   The modern form evolved in the estuaries and coastal waters of Africa, but crossed the Atlantic to reach South America as well.  At their peak, the Gavialoidea were numerous and diverse, and they occupied much of Asia and America up until the Pliocene.  One species, Rhamphosuchus crassidens, is believed to have grown to an enormous 50 feet (15 meters)!

The modern day Indian Gharial has adapted so well to catching fish that they spend almost their entire life in the water.  The forelimbs of adults are actually too weak to raise their body clear off the ground, and they must perform a belly slide/shimmy to get around on land.  Don’t let the slender snout fool you, these guys are massive, with some males reaching almost 23 feet (7 meters) long!  Unfortunately, due to it’s enormous size and false rumors of being man eaters, most of these super giants have been killed by humans, and the species as a whole is currently listed as critically endangered.  Conservation programs have been implemented in India and Nepal based on the establishment of protected areas, and restocking these areas with animals born in captivity, but nowhere has this restocking reestablished viable populations.

The Indian Gharial is first and foremost a fisherman.  Sometimes they hang out near fast moving water with their jaws wide open waiting for the feel of a fish.  Other times they will actively hunt fish underwater.  All it needs to do is find it’s prey and either snap down with it’s jaws, or slash it’s head back and forth in the water to spear the fish with it’s rows of interlocking equally sized needle sharp teeth (27-29 upper, 25 or 26 lower).  Large animals can’t be taken due to it’s slender jaw.  In most Crocodilians, the fourth tooth of the lower jaw is the main defining characteristic, it’s either in a pit in the upper jaw, or a groove outside the upper jaw.  Gavialines are different, as all of their teeth are the same size, and they all interlock.  This makes for a very effective fish and small animal trap.

While fish is their main food of choice, occasionally a little lizard or small mammal has been found in adult stomachs, but it’s rare.  Another thing that has been found in their stomachs are human artifacts.  This was once used as proof that Gharials were man eaters, even though their slender snout is thinner than a man’s arm, and would snap under the pressure of such a large animal.  We now know that Gharials would ingest old human artifacts that were part of the cremated bodies floating down the river (a custom on the Ganges).  We also know other Crocodilians often swallow small rocks to help with digestion and buoyancy in the water, so perhaps a bracelet or a necklace floating in the river would serve the same purpose.  Of course this is not to say they are not dangerous at all, a female will not hesitate to inflict serious damage on anyone who intrudes on her nest.  But, the claims that they are a man eaters are preposterous, as a calm Indian Gharial is no threat to anyone.  Just look at this happy guy sunbathing on his rock, not bothering nobody :).