An Elk in a Snowstorm 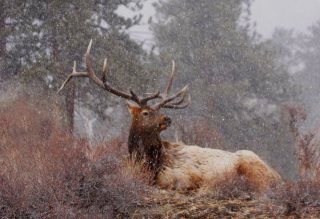 Elk, also called wapiti, are related to deer, but are much larger than most of them.  A bull (male) elk’s antlers may reach 4 feet (1.2 meters) above its head, making that animal 9 feet (2.7 meters) tall!  Bull elk lose their antlers each March, but they begin to grow them back in May in preparation for the late-summer breeding season.  In early summer, elk migrate to high mountain grazing grounds where the cows (females) will give birth.  During the late summer breeding season, the banging of bull elk antlers echoes through the mountains. These powerful animals use their mighty horns in violent clashes that determine who gets to mate with whom.  Males with the bigger antlers, typically older animals, usually win these battles and dominate small herds.  Finally, in the winter, they join into larger hers.  The herds then return to lower valley pastures where elk spend the season pawing through snow to find what little food remains.  Often times, when the weather gets very cold, they will simply sit down and let the snow storm pass, conserving precious energy (pictured here).