In 2009, Aidan Hartley, a British journalist investigated black market elephant ivory in Tanzania.  He we extremely disturbed to find that he could find pretty much find as many kilos of elephant tusks as he wanted on the Tanzanian streets.  However, he said that the slaughtering of elephants that occurred in Selous National Park is what really spoke to him of the horrors that poaching wrought.  In the last three years 31,000 elephants have been killed in Tanzania alone while their bullet ridden carcasses are left to rot where they are shot.  Hartley also found that the Tanzanian government did little to nothing to stop the slaughter.

An elephant in Selous National Park.

A collection of illegally hunted elephant’s tusks, poachers guns, knives, and axes to remove the tusks from the skulls. 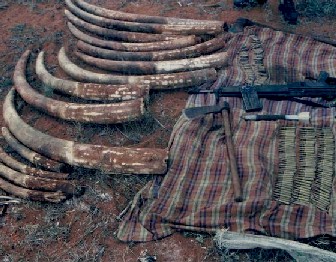