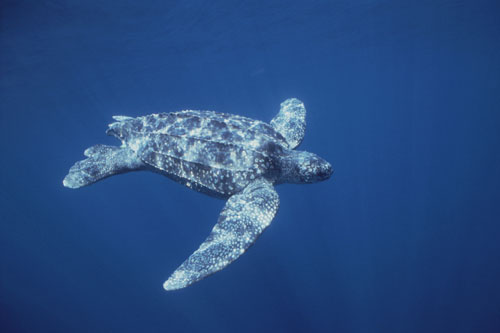 The Leatherback Turtle, Dermochelys coriacea, is listed as ‘CRITICALLY ENDANGERED’ on the IUCN Red List of Threatened Species™.  It is the world’s largest turtle and is found throughout every ocean (it has been recorded as far north as Alaska and as far south as the tip of South Africa).

Threats to Leatherback Turtles worldwide include loss of nesting habitat, accidental capture in fishing lines and nets, collisions with boats, egg collection for human consumption, and ingestion of discarded plastics which are often mistaken for jellyfish (their preferred diet).

Exploitation of sea turtles and their products has become illegal in most countries.  Conservation programmes have been established in most of their nesting areas to protect egg clutches and nesting females from poachers.  Because of the severe decline in the world’s population of Leatherback Turtles, better protection of critical nesting habitat, and the reduction of incidental captures in fisheries is essential.  Furthermore, because the migratory routes of this species cross territorial waters of many nations, further international collaboration focusing on conservation will greatly enhance its chances of survival.

Geographic Range of the Leatherback Turtle

To learn more about the Leatherback Sea Turtle, click here.  Or visit the IUCN Red List of Threatened Species by clicking their logo below.