Throughout much of Southeast Asia and countries like Vietnam there is still a thriving market for bushmeat and animal parts. The fact of the matter is that it’s still culturally acceptable in some of these countries to eat these animals and use their parts for medicinal purposes. Saturday, security staff at southern Ho Chi Minh City’s Tan Son Nhat airport on Saturday confiscated 33 live Pangolins, Tuoi Tre newspaper reported. The pangolins, also known as scaly anteaters, had been sold to customers in the country’s north at a price of one million dong (53 dollars) per kilogram, Tuoi Tre reported.

Demand for pangolin meat, with its supposedly medicinal and aphrodisiac qualities, is widespread in China and Vietnam. There is a high demand for pangolin scales for traditional medicines in many parts of the world. Meat is eaten by indigenous peoples and hides are also used to make shoes. One of the main importers of pangolin skins from 1980-1985 was the United States of America. The International Union for Conservation of Nature (IUCN) list pangolins as endangered.

Separately, Vietnamese police have seized about 100 kilograms (220 pounds) of ivory near the border with China, a newspaper reported on Sunday. Traffic police made the discovery after stopping a car early Friday morning, said Tuoi Tre, which did not say if any arrests were made. 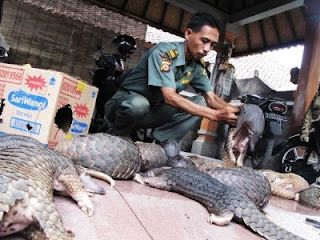 To Read The Full Article…Click Here