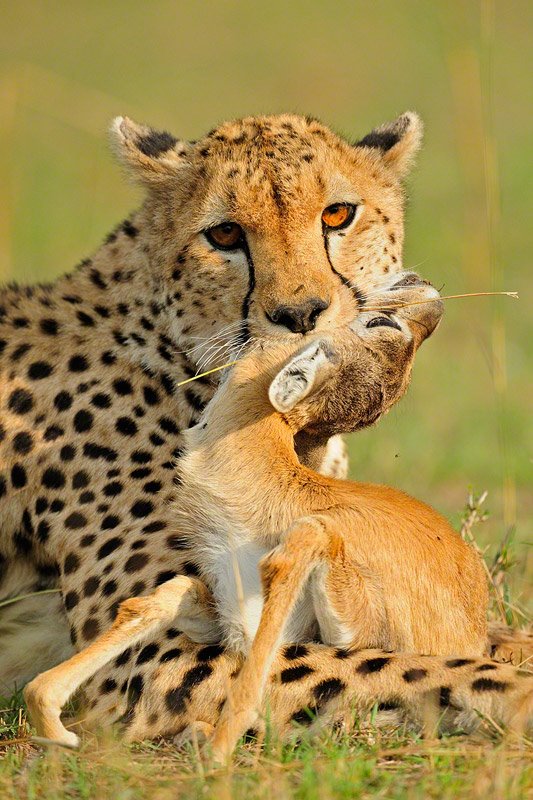 The Cheetah (Acinonyx jubatus) is a large-sized feline from the family Felidae.  Historically, cheetahs were found throughout Africa and Asia, from South Africa to India.  They are now confined to parts of eastern, central and southwestern Africa, and a small portion of Iran.  They are the only extant member of the genus Acinonyx.  The cheetah is a vulnerable species, and of all the big cats, it is the least able to adapt to new environments.  It has always proved difficult to breed in captivity.  Once widely hunted for its fur, the cheetah now suffers more from the loss of both habitat and prey.  Perhaps only 7,000 to 10,000 of these big cats remain, and those are even under pressure as the wide-open grasslands they favor are disappearing at the hands of human settlers.  Cheetahs will never prosper as long as we continue to destroy their habitat.

Cheetahs are tan in color with black spots all over their bodies.  They can be distinguished from other big cats by their smaller size, spotted coats, small heads and ears, and distinctive “tear stripes” that stretch from the corner of their eye to the side of their nose.  They are typically 2.5 -3 feet (.8-.9m) at the shoulder, and weigh about 110-140 lbs (50-64kg).  This cat is notable for modifications in the species’ paws as well.  It is one of the only Felids with semi-retractable claws, and with pads that disallow gripping, and thus the ability to climb trees.  The genus name, Acinonyx, actually means “no-move-claw” in Greek.  Cheetahs are also typically solitary animals.  While males sometimes live with a small group of brothers from the same litter, females generally raise cubs by themselves for about a year.  They mainly eat Gazelles, Wildebeest calves, Zebra Calves, Impalas, and smaller hoofed animals.

The Cheetah is the world’s fastest land mammal, and can go from 0 to 60 miles (96 kilometers) an hour in only three seconds (that’s quicker than almost any street legal car).  They can also top out at an impressive 70-75 miles per hour.  These big cats are quite nimble at high speed, and can make quick and sudden turns in pursuit of their prey.  They are daylight hunters that benefit from stealthy movement and a distinctive spotted coat that allows them to blend easily into high, dry grasses.  Before unleashing their speed, Cheetahs use exceptionally keen eyesight to scan their grassland environment for signs of prey, like antelope and hare.  When the moment is right, a Cheetah will jump out of it’s hiding spot, sprint after its prey, attempt to knock it to the ground, and kill it with a suffocating bite to the neck (pictured here).  They must eat quickly before they lose the kill to other bigger and more aggressive carnivores.  Such chases cost the hunter a tremendous amount of energy in only a short amount of time.  If successful, the cheetah will often drag its kill to a shady hiding place to protect it from opportunistic animals.  Cheetahs need only drink once every three to four days.