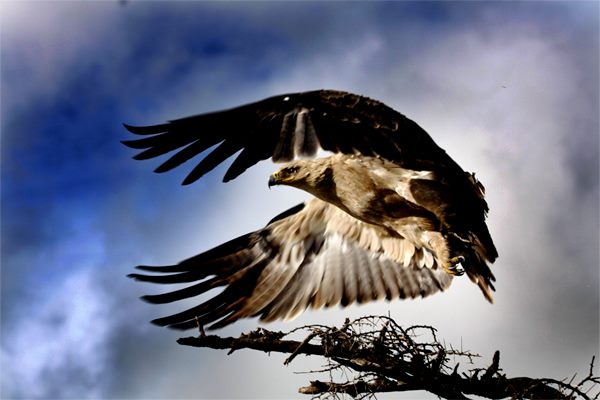 The Tawny Eagle (Aquila rapax) is a large bird of prey.  Like all eagles, it belongs to the family Accipitridae.  It was once considered to be closely related to the migratory Steppe Eagle (Aquila nipalensis) and the two forms have previously been treated as conspecific.  They were split based on pronounced differences in morphology and anatomy.  It breeds in most of Africa, both north and south of the Sahara Desert, and across tropical southwestern Asia to India.  It is a resident breeder which lays 1–3 eggs in a stick nest in a tree, crag or on the ground.  It favors open dry habitats, such as desert, semi-desert, steppes, or savannah, plains.

While this is a large eagle, it is one of the smaller species in the Aquila genus.  It is 60–75 cm (24–30 in) in length and has a wingspan of 159–190 cm (63–75 in).  Weight can range from 1.6 to 3 kg (3.5 to 6.6 lb).  It has a tawny body, and blackish flight feathers and tail.  The lower back is very pale.  This species is smaller and paler than the Steppe Eagle, although it does not share that species’ pale throat.  Immature birds are less contrasted than adults, but both show a range of variation in plumage color.