RANGERS at the War for Conservation, always working in precarious conditions, with a constant uncertainty of what to expect but always willing to risk their lives to ensure the preservation of Africa´s habitats and its species.

These unknown and misunderstood Conservation Heroes spend the majority of their lives in the field, fighting against poachers and the illegal bush meat trade. 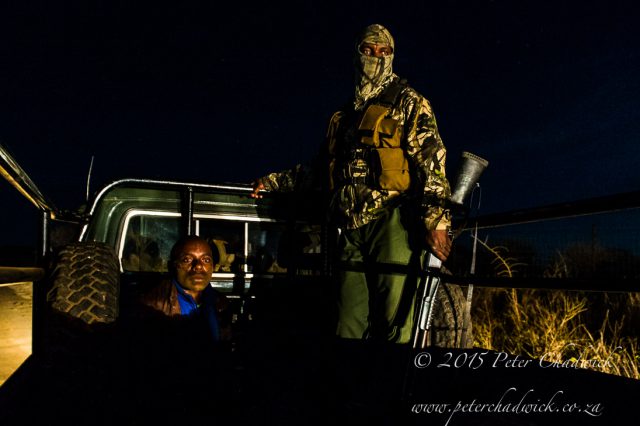 Have a closer and vivid look at the lives of these heroes through the eyes of the International League of Conservation Photographer and conservationist Peter Chadwick. Driven by his dad´s passion for conservation and his love for photography, – I fondly remember many special moments walking with him through the bush tracking and learning about rhinos from a very young age-, he has used his powerful images to impact, inspire and promote action to create real change.

His “Ranger Legacy” conservation photography project will give you a glimpse into the lives of the rangers.

For a moment, let us be a Ranger! 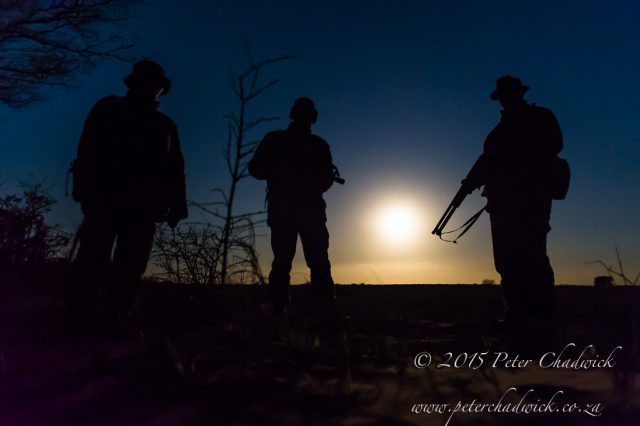 Picture: Rangers prepare to head out on a night time patrol during full moon. This is when poaching gangs increase their activity in protected areas.

As part of their varied duties, rangers are responsible for protecting all species against poachers and not only the elephants. They are guardians facing tremendous challenges at the frontline in the war against poaching and the protection of the environment.

Apart from dealing with the horrors of poaching, there are still special moments that make the effort and hardship worthwhile.

While in patrol, poachers wounded a white rhino bull and a decision was taken to try and dart and treat the wounded animal. Unfortunately, the vet that was needed for this operation was only available in a few days time. With it also being full moon when there is increased activity by the poachers, anti-poaching operations had increased on the protected area. 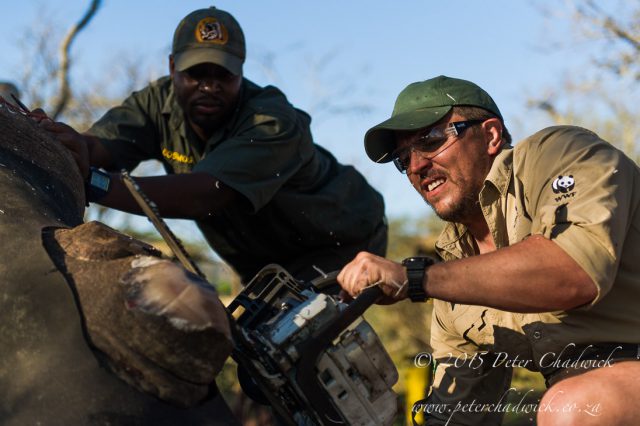 Picture: A ranger carefully and professionally removes the horn of a white rhino so as to reduce the risk of the animal being poached.

“Every night, for three nights in a row, this wounded rhino came and found our anti-poaching team and stood close by us for the night. In some cases, he was only a meter away from our camouflaged positions. I am convinced that he was aware that we were there to protect him. His subsequent treatment and dehorning by the vet was successful and he has now fully recovered- 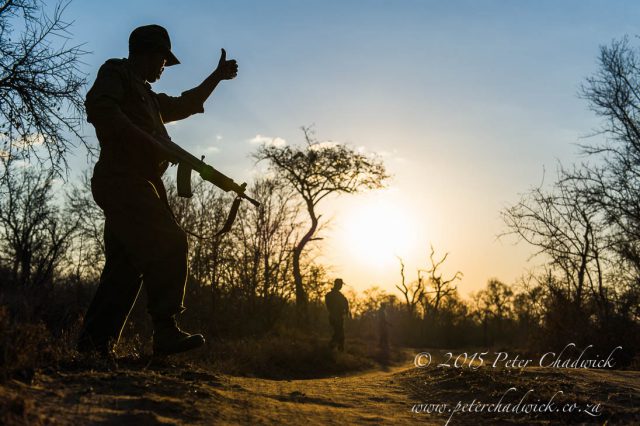 Picture: A ranger makes use of hand signals to communicate with the rest of his team as they cautiously cross over a road.

Rangers working in rough and rugged terrain face numerous challenges including lack of adequate equipment and communication networks. Patrols are dangerous and there is always the risk of encountering well-armed poachers. Patrol members signal to one another by hand and regularly make stops to watch and listen. They walk silently so as not to give away their presence and they search constantly for any irregularity, using their hearing to listen for any unusual sound or alarm calls. Even sense of smell is used to detect signs of human presence. They are true guardians. 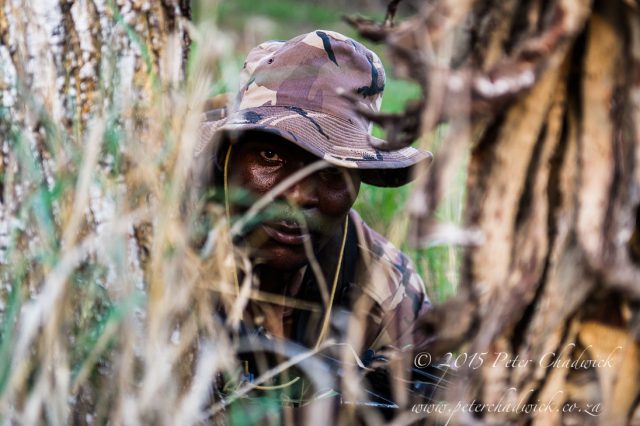 Picture: A ranger lies concealed in amongst thick vegetation.

Rangers create true bonds within their patrol group, depending fully on each other and trusting one another with their lives.

It is indeed a stressful and dangerous job filled with uncertainty, but moments of liberation and laughs can sometimes occur.

Picture: An anti-poaching team crouches in the bush, discussing their next moves during a follow up operation after poachers.

On one night during patrol, a rhino was heard approaching along the same game trail that a patrol was walking on. The ranger’s split into two groups, taking cover on either side of the trail. When it was safe and after the rhino had passed within a few meters, Peter signalled softly for the patrol to continue on its way. A few of the team had climbed high into the branches of a very top of a very thorny acacia tree and they now painfully had to remove themselves from this tree. –Moments like this certainly help to ease the stress and team members will be quick to rag others wherever possible. This teasing can only happen where the closest of bonds are in place and where team members trust one anther fully. – Still, they never give up! 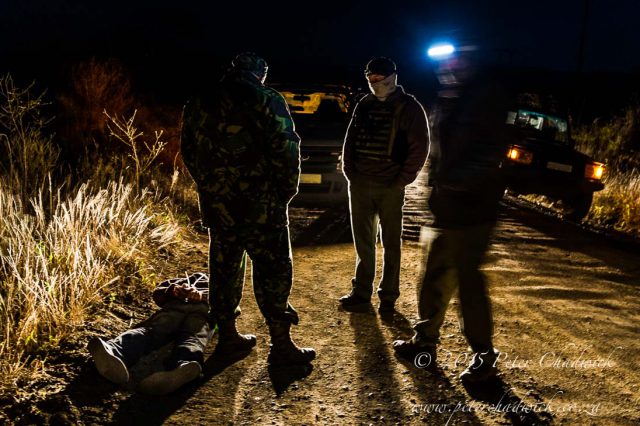 Picture: An anti-poaching team carries out a patrol briefing prior to heading out on a night-time operation.

Peter has had the incredible privilege of learning their languages and cultures, to sit around the fire to laugh and joke with them. –We have spent hours out on patrol tracking rhinos, watching African elephants bathe or enjoying seeing the sun set over the African bushveld when day turns into an awe-inspiring star-filled night-. We have to keep these special memories alive as it spurs us on to keep on giving our best for conservation. 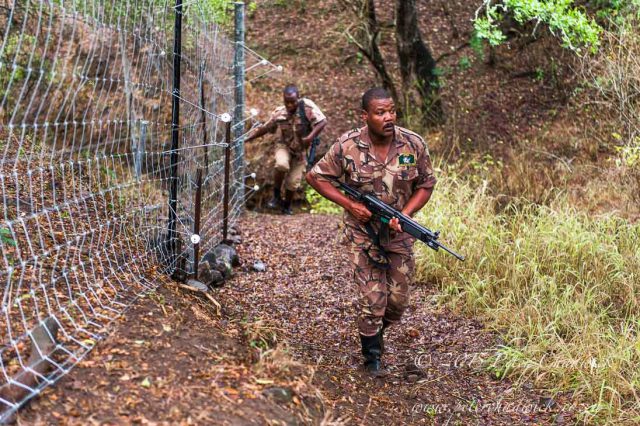 Picture: Boundary patrols are critically important in determining if poachers have entered onto a protected area.

Rangers spend long periods of time away from their families and often are poorly equipped with the most basic of anti-poaching equipment. Money is been used on highly expensive technological tools against the poaching but we need the Rangers, the only humans who are directly working on the field who need special training, equipment and requisite our support; basic things like repellent, socks and boots are always needed. Without them, without the human force, without our heroes, we will loose the war against the illicit wildlife trade.

Peter has been a professional conservationist for 30 years, working with countless Ranger teams across Africa. – Together, we have been frustrated by poaching gangs for months on end until all of our efforts finally paid off with the arrest of these gangs. These poachers have on occasion, shot at us and we have in turn had to shoot back. I have seen the consequences of these violent encounters on both the poachers and on the psychology of my staff. I have had to casevac rangers when they have been injured and have had to restart their hearts in the confined space of small helicopters en-route to medical support. I have also had to watch the life fade from their eyes and then be the first to tell their beloved family members that their father/son/husband would no longer be returning home-.

Peter is part of the large family of courageous rangers and he knows the importance of their work.

Picture: A white rhino bull is sedated prior to having his horn removed to reduce the risk of poaching.

Its is not easy to be a Ranger on the field, but we can ALL be Rangers by supporting them and creating awareness of the difficulties that they face everyday. These great people make huge sacrifices for conservation.

It is not only the poaching of rhino and elephant that is taking place on the African continent. The bush meat trade, that uses snares or hunting dogs, kills thousands of animals on a daily basis and has a massive negative impact on the environment. 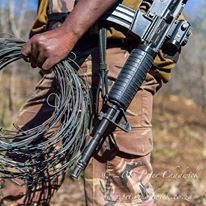 Picture: In this recovery, twenty snares were recovered by an anti- poaching ranger patrol in a game reserve in South Africa. Snares are primitive wire nooses designed to tighten around an animal’s leg (a restraining trap) or neck (a kill trap). These snares cause immense pain, suffering, and death and in many cases the poachers to do not even return to recover the carcasses. Snares do not discriminate and commonly catch non-target species that includes those that are protected and endangered. 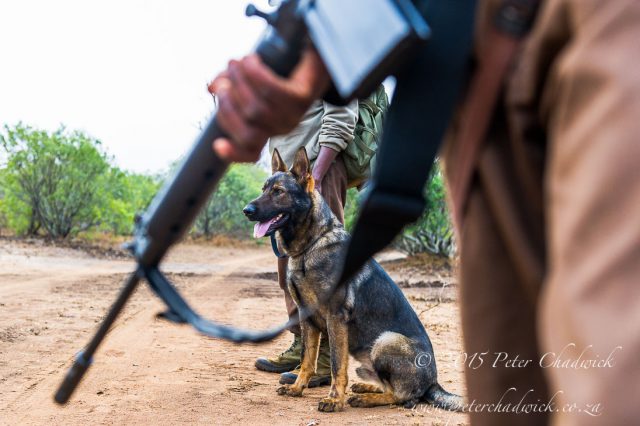 Picture: Tracker dogs are playing an increasingly important role in anti-poaching efforts. They are used in various roles from tracking through to attacking and apprehending poachers.

Rhinos are poached for their horn, leaving them wounded and left to die. When rangers find them they intervene immediately to save them. They feel deeply for them, it is indeed a hard and exhausting job, physically and emotionally, to watch them suffer and work as fast as they can to save them. They fill with joy when rhinos are recovered.

Picture: Dehorning of rhino is another tool that is used to reduce poaching. A well-qualified vet sedates the rhino and the horns are carefully and professionally removed. These horns, which comprise of keratin, are made of the same substance as your fingernails and like the fingernails, they do grow back after time.

Anti poaching units have to respond immediately when poachers are attacking in protected areas. It is very important to have a good communication with the communities around to be able to work together and act fast. Rangers not only help wildlife, they also safeguard the surroundings of protected areas and the ecosystems.

Rangers work in teams, at day and at nights, under the constant threat of armed poachers. They gather data and constantly monitor elephants, rhinos, pangolins, vultures, antelopes, lions, gorillas and many other species involved in the illegal Wildlife trade.

Picture: Here, a four meter African python was fortunately recovered alive from a group of poachers during a night time anti-poaching operation

Rangers protect our species and their environment with their hearts and souls, confronting constant dangers just for the purpose of saving wildlife – They need our fullest support and we need to be aware of the difficulties that they face. We need to ensure that our political leaders are aware of the sacrifices that these amazing people are making for conservation. We must ensure that credible projects that support our rangers are well funded.

Picture: Rangers undergo rigorous theoretical and practical training before being placed into the field.

In support of the rangers, the Game Rangers Association of Africa (GRAA) runs a mentorship program. Through specialised training and mentoring we are ensuring that the rangers are well equipped to tackle their difficult duties.

They are true heroes that need our fullest support! 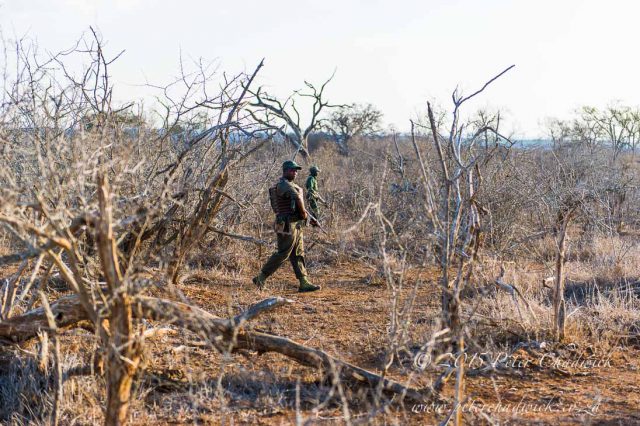 Picture: Rangers work in rugged terrain often with minimal equipment and a lack of proper communications.

This conservation photography project by Peter Chadwick is carried out in partnership with the Game Rangers Association of Africa (GRAA) that provides support, networks and representation for game rangers across Africa. Support Africa’s Rangers by supporting the GRAA.

Thank you Peter, you are a true and committed Ranger working for our earth. 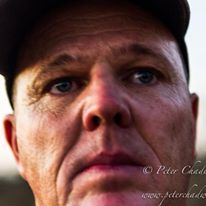 What does GRAA focuses?

Learn more about the Rangers at http://www.gameranger.org

We need Rangers to save and protect wildlife, without wildlife, humans would not exist!

Bush Warriors works in partnership with GRAA by creating awareness and supports their unique work.