In a world where rhinos and other species are continuously disappearing, a world of greed, massive extinctions, irresponsibility and lack of conscience, we still find hope with many kinds of heroes, heroes that talk and touch people through images like Justin Mott, a photojournalist that is creating awareness through his images in this amazing project photographing Fatu and Najin, our last Northern White Female Rhinos. 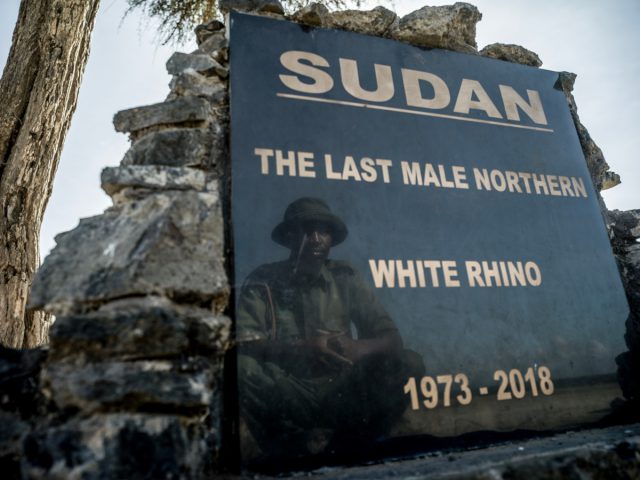 Many people mourned the loss of Sudan, the last White Northern Male Rhinoceros on earth who died March 19th  2018. He was 45 and lived at the Ol Pejeta Conservancy in Kenya. He was put to sleep after age-related complications that worsened significantly.

His death left only two females, his daughter Najin and granddaughter Fatu, the last of the subspecies alive in the world. Through images of hope, you will meet them, the caregivers and the rangers who protect them through the eyes of Justin. 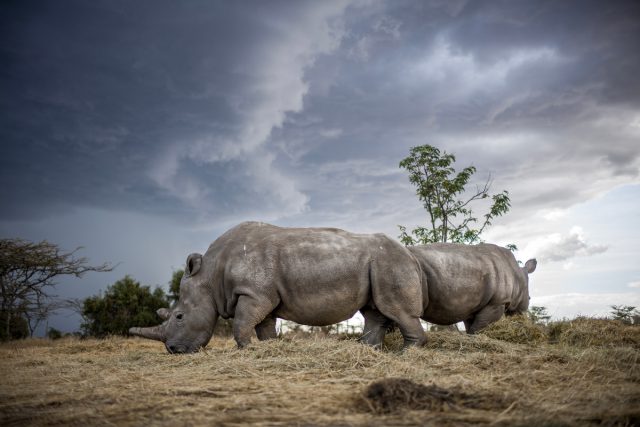 The last of the White Northern Rhinos, Fatu and Najin

Justin is an American who grew up in Rhode Island and moved to Vietnam to pursue personal projects and start his career as an editorial and an assignment photographer.

I was drawn to stories that could have an impact on society and decided to stay in Vietnam to pursue this line of work. The first few years of my career were quite exciting, flying all over Asia and beyond covering all sorts of fascinating topics but going undercover posing as a potential buyer of rhino horn at a black-market mafia dealer’s home stuck in my head and planted a seed that wouldn’t sprout for over a decade later.

After a period of filming, TV appearances, and running his commercial photography business he knew something was missing.

After I turned 40 in 2018, I decided to make some changes in my life an actively carve out time for my own projects and that led me to the start of my current project “Kindred Guardians”. The project is focused on documenting people around the world who dedicated their lives to helping animals. 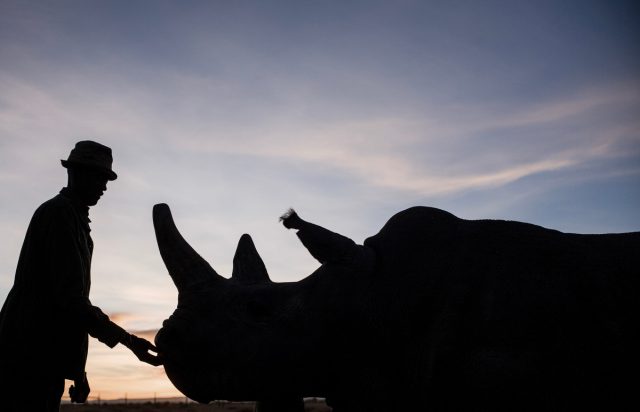 A touch of hope

Although the project is self-funded, after the last Northern White Rhinos project, he already has many more stories to pursue around the world. I’m still trying to figure out financially how to keep this going for a few years because I have so many ideas, but I’ll figure it out somehow.

Justin has loved animals since he was a kid, in his early days of living in Vietnam he photographed a slaughterhouse for pigs and as he recalls, “The sounds and sites are still emblazoned in my mind,” it was a miserable experience that made him feel helpless with so many emotions going on inside, he even hid from any forms of animal cruelty for a while.

Last year I knew something was missing from my life. I knew I had to get back to doing stories that mattered to me and I was slowly starting to open myself up emotionally to learning about animal cruelty and to doing my part. I wanted to use what I do best, photography, to help animals.

He started imagining doing a long-term project photographing people around the world who dedicate their lives to animal welfare, so he began researching intriguing stories.

Last year after reading a story in National Geographic about the last remaining male Northern White Rhino who had recently died, documented by powerful images of the photographer Ami Vitale, he knew what he wanted.“I also felt I could use my network to raise awareness of the rhino’s plight within a country that is one of the largest consumers of their horn.” 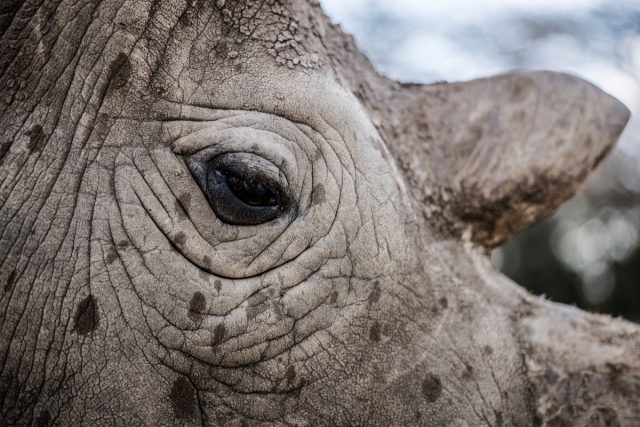 The eyes of magic

This is part of his larger project and such a powerful story was a perfect first chapter of Kindred Guardians.

Meeting the last two white rhinos was emotional. His mind raced through the entire trip with excitement to begin this personal project. After landing in Nairobi, a 4 hours trip to Ol Pejeta Conservancy, he threw his bags in the room and raced straight to meet the rhinos. The landscape was gorgeous with Mount Kenya as a backdrop and epic Kenya blue skies to look up at.  It was the perfect!

“I met Peter and Zacharia, the rhino caretakers, and they took me to meet Fatu and Najin. It was truly a special life changing experience for me on so many levels.” 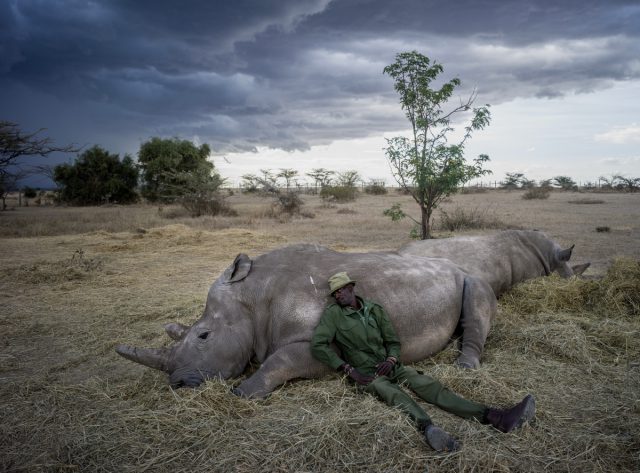 A crash of feelings where present, thrilled to be back on the field, scared about his high expectations of the project and a true feeling of sadness and angriness watching these amazing creatures that were in this vulnerable situation because of mankind. “Overall, I was simply happy to be back in touch with this side of myself.”

With a gorgeous Kenya landscape, the rhinos live in a confined and protected area with a huge and controlled amount of space to roam free and plenty of grass to graze on. They live within nature and sometimes other wildlife come to interact through the spaces in the fences. 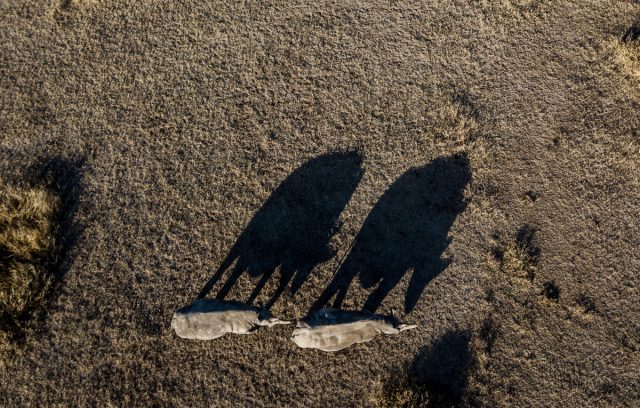 Mother and daughter together roaming free

Many people are involved in the caring of Fatu and Najin, they are the caretakers that have a more intimate and direct relationship and the rangers who are in charge of their security and patrol the giant conservancy 24/7. They guard day and night using automatic weapons and camp overnight in the bush looking for poachers.“They sacrifice their lives to protect these animals and spend large amounts of time away from their family for their work.” 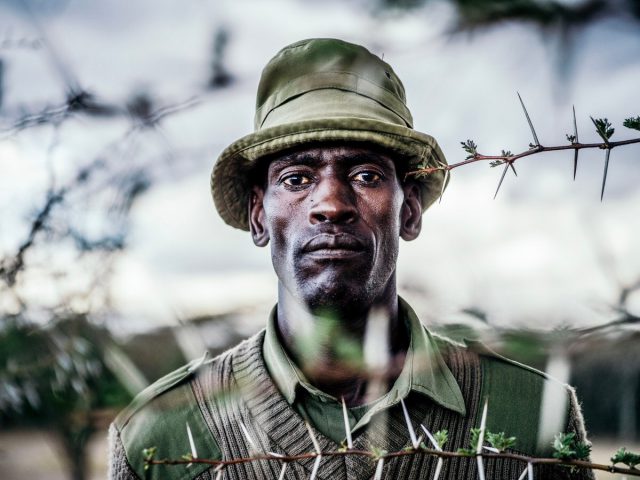 The face of bravery, always risking their life in favor of conservation

He spoke to one of the rangers about an incident in 2018 where they killed three poachers in self-defense, it is a very dangerous job where they risk their lives every day. Rangers are professionally trained, and they constantly use the specialized K9 unit to track poachers, sniff out ammunitions or attack if necessary. 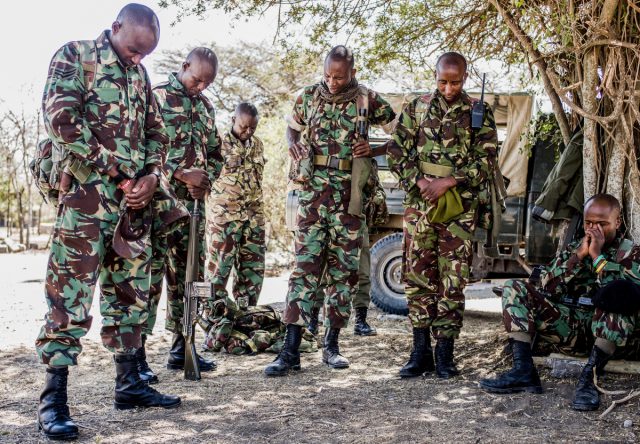 Praying for the best

Najin is the mother of Fatu. They were raised in a captivity zoo in the Czech Republic before being sent to Ol Pejeta conservancy in Kenya where they had to build new enclosures and prepare their staff to welcome the rhinos arrive at its heavily guarded grounds.

Najin is very calm while Fatu is a little bit more nervous. Najin and Fatu live with another Southern White Rhino female named Tauwo.“She is very protective of both of them and during my daily visits she often came to check on me when I got close to take pictures, it was cute to see how protective she was. I was there for 7 days, all day and into the night, and Tauwo always kept a watchful eye on me. “

As they grew up surrounded by people thy are not scared easily like wild rhinos. They are extremely gentle, spending their days together doing everything in unison, grazing, drinking water, napping together. They are tender with each other, often sleeping resting snuggly against each other. They just live in peace and protected. 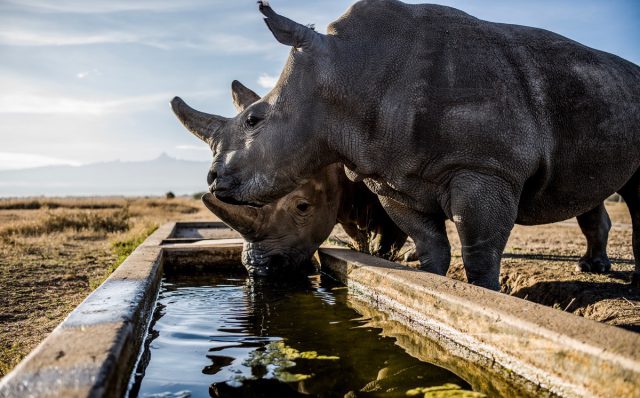 For a better interaction, the caretakers taught Justin the best spots to scratch them, that is behind their ears and inside their hind legs. In the wild no kind of interaction is permitted.

Justin shot beautiful and very touching images. He is not a traditional wildlife photographer, for this project he used predominantly a 35 mm lens. He amazingly got close to his subjects to capture the level of intimacy he’s striving for, so he used a quiet camera and moved slowly trying not to disturb them. They all felt safe and with the constant supervision of the rangers. 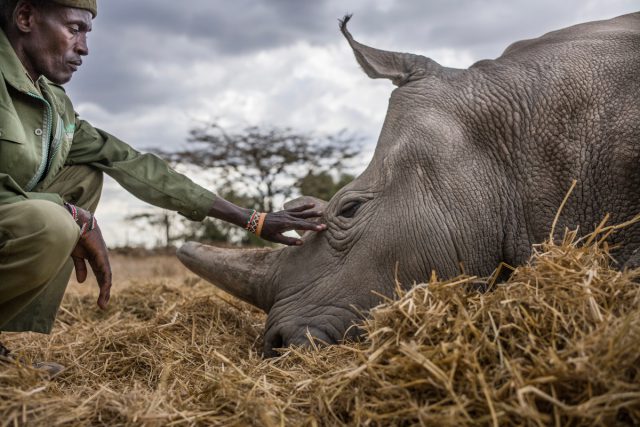 The touch of love and trust

After 7 days Justin had to say good bye. I did have a little moment to say see you later, not goodbye.  Justin is already planning a trip back next year to teach a workshop about photography and how to use visual storytelling to help a cause.

An image speaks for itself, Justin’s images want to celebrate the tenderness, bravery, and dedication of the caretakers and guardians of the rhinos. He wants to create awareness to make people have sympathy for these beautiful animals. I hope my images can humanize them in a way that humans can relate to. 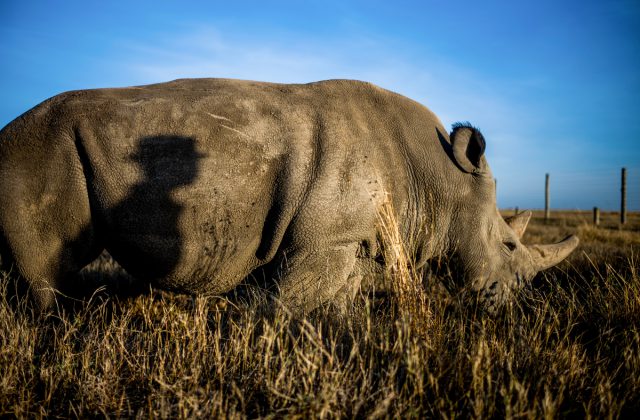 We will never leave you

Justin hopes his images have a real impact on people to respect these amazing animals and hopefully to get people to stop poaching and save the species from extinction.

Ol Pejeta, the conservancy organization who keeps Fatu and Najin safe needs your constant help. All donations for IVF help keep their subspecies alive. It’s extremely expensive to care for them, about 9 million USD, so they need help to save the subsistence of the Northern White Rhino. 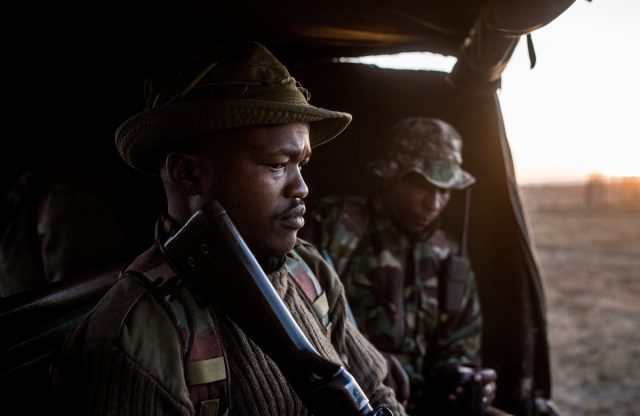 Our Rangers need our support 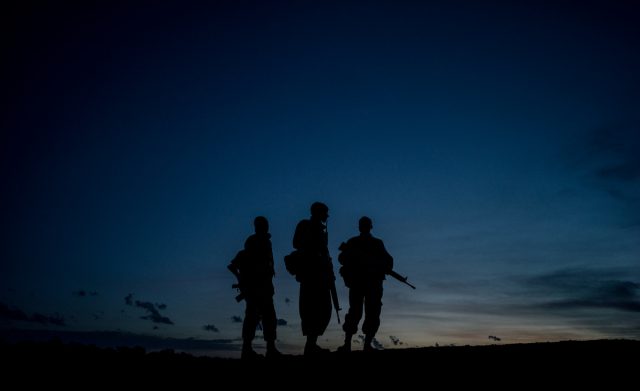 24/7 guard committed to save wildlife

Justin has many projects and stories that need urgent action like orangutans, gibbons, elephants, and a dog shelter in Thailand. If you know an amazing story about a person dedicating their lives to animal conservation and animal welfare, please feel free to email Justin at justin@justinmott.com

All photographs are owned and Copyright  by Justin Mott 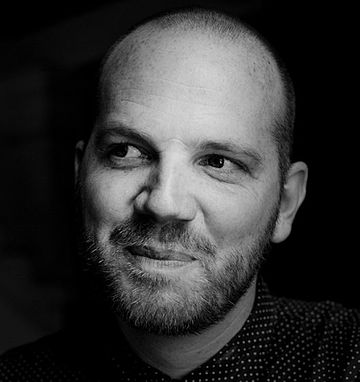 Please share Justin’s amazing photographic project to create awareness and help these vulnerable species. We still have a lot to do and a lot to protect, please educate people about their vulnerability and their importance in the ecosystem.

DO NOT buy any kind of rhino product! Their survival depends on us!

Thank you so much Justin for your awareness project and your beautiful photographs that help these iconic species.

Thank you to Ol Pejeta Conservancy, caretakers and Rangers for helping Najin and Fatu and all the subspecies survive.

Rhino horn is not medicine and the only way to stop the black market, illegal traffic and poaching is to stop the demand. 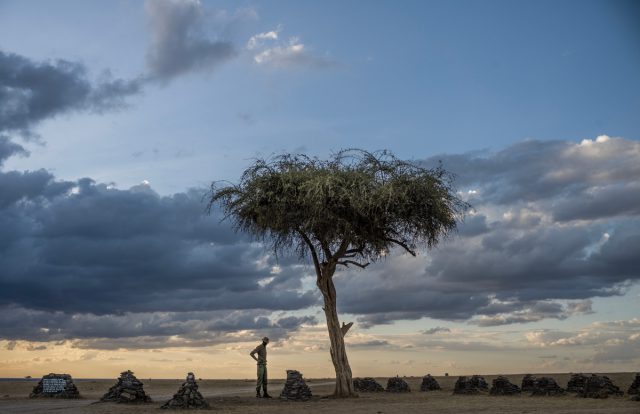