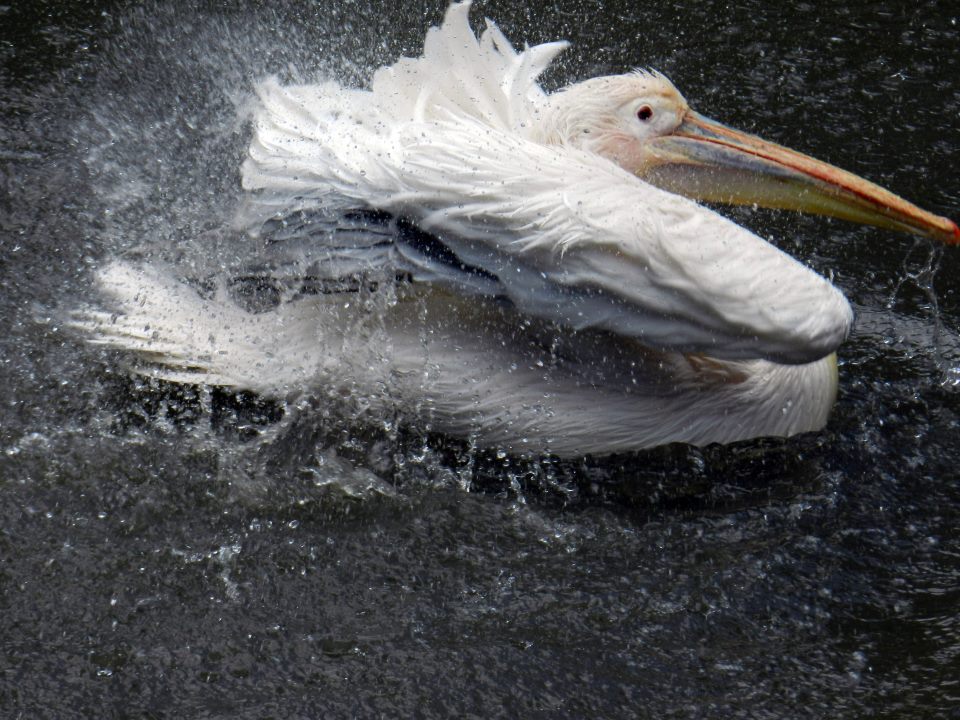 Pelicans are large water birds in the family Pelecanidae.  They are characterized by a long beak and large throat pouch, used in catching, and draining water from, their prey.  Pelicans frequent inland and coastal waters where they feed principally on fish. Gregarious birds, they breed colonially and often hunt cooperatively.  They have a long history of cultural significance in mythology, heraldry and Christian iconography.

The Great White Pelican (pictured here) breeds from southeastern Europe through Asia, and in Africa in swamps and shallow lakes.  It is the second largest pelican species behind the Dalmatian Pelican.  Males are larger than females, and have a long beak that grows in a downwards arc, as opposed to the shorter, straighter beak of the female.  Immature birds are grey and have dark flight feathers.  In flight, it is an elegant soaring bird, with the head held close to and aligned with the body by a downward bend in the neck.

The Great White Pelican is well adapted for aquatic life.  The short strong legs and webbed feet propel it in water and aid the rather awkward takeoff from the water surface.  Once aloft, the long-winged pelicans are powerful fliers, however, and often travel in spectacular V-formation groups.  The pelican’s pouch is simply a scoop.  As the pelican pushes its bill underwater, the lower bill bows out, creating a large pouch which fills with water and fish.  As the bird lifts its head, the pouch contracts, forcing out the water but retaining the fish.  A group of great white pelicans will gather in a horseshoe formation in the water to feed together.  They dip their bills in unison, creating a circle of open pouches, ready to trap every fish in the area.