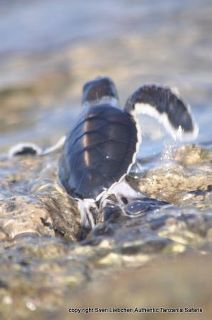 The Green Sea Turtle (Chelonia mydas) is truly a champion of evolution.  Their ancestors were land dwellers, but they adapted to life in the Ocean some 150 million years ago.  These reptiles are so ancient, they were around to watch the Dinosaurs evolve and become extinct!  The Green Sea Turtle can be found in tropical and subtropical waters all across the globe.  The “Green” in it’s title comes from the greenish color of the turtles’ fat, which is only found in a layer between their inner organs and their carapace (shell); the carapace is usually olive or brown depending on it’s habitat.  There are two distinct types of Green Sea Turtle, and there is debate whether or not they are two independent sub-species.  The Atlantic Green Turtle is normally found off the coast of Europe and North America, while the Eastern Pacific Green Turtle can be found in coastal waters from Alaska to Chile.  Green Sea Turtles are also known to frequent the Western Indian Ocean, and they are the most common species found in Tanzania, feeding on extensive sea grass beds along the Tanzanian coast.  Unlike most sea turtles, adults are herbivorous, feeding solely on algae and sea grass.  Younger turtles, however, may eat invertebrates like crabs and jellyfish.

Green Sea Turtles are among the largest sea turtles in the world, and adult males can weigh up to 700lbs (the males are slightly larger than the females, and they have longer tails).  Their carapace can measure up to 5 feet (1.5 meters) long.  They have enormous paddle like flippers, making them excellent swimmers, a necessary skill in order to make the long migrations from feeding sites to nesting points.  These turtles mate every 2-4 years, usually in shallow coastal waters.  The females will leave the sea, and climb onto a sandy beach in order to lay her eggs; she usually comes back to the same beach her mother laid her.  She digs a pit in the sand and drops off 100-200 of her eggs.  Then she covers the pit with sand, and returns to the ocean, leaving her eggs to incubate and hatch themselves some two months later.  The temperature of the nest during incubation determines the sex of the hatchlings. Warm, dark sand produces mostly females, while eggs laid in cool, white sand results mostly in males.

Pictured here is perhaps the most dangerous point in any young Green Sea Turtle’s life; the scamper from nest to sea!  Baby sea turtles are extremely vulnerable at this age, having no mother to protect them or teach them survival skills.  Predators patrol these beaches (crabs, gulls) just waiting to pick off one of these little hatchlings before they can reach the sweet sea.  The lucky few that survive the mad dash to safety can look forward to living up to 80 years in the wild.

Unfortunately, Green Sea Turtles are listed as an endangered species, and a sub-population in the Mediterranean is listed as critically endangered.  In most countries, they are protected from exploitation, and it is illegal to collect, harm or kill them.  Some countries even protect their nesting sites.  Despite these efforts, they are still being killed illegally for their meat and eggs.  Boat propeller accidents, fishnet-caused drowning, and the destruction of their nesting grounds by human pollution/encroachment have all led to their dwindling numbers.