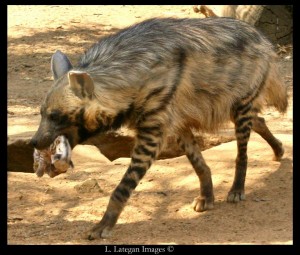 The Striped Hyena (Hyaena hyaena) is a species of true Hyena native to North and East Africa, the Caucasus, the Middle East, Middle and Central Asia, and the Indian Subcontinent.  It is the smallest of the true hyenas, and retains many primitive viverrid characteristics lost in larger species, having a smaller and less specialized skull.  Though primarily a scavenger, large specimens have been known to kill their own prey, and attacks on humans have occurred on rare instances.  The striped hyena is a monogamous animal, with both males and females assisting one another in raising their cubs.  A nocturnal animal, the striped hyena typically only makes itself visible in complete darkness, and is quick to return to its lair before sunrise.  Although it is often considered a cowardly animal (due to its habit of faking death when attacked), it has been known to stand its ground against larger predators such as leopards in food disputes.

Hyenas are not members of the dog (canid) or cat (felid) families.  Instead, they are a unique family all their own, Hyaenidae.  There are four members of the Hyaenidae family: the Striped Hyena (Hyaena hyaena, pictured here), the Spotted Hyena (Crocuta crocuta), the Brown Hyena (Parahyaena brunnea), and the Aardwolf (Proteles cristatus, it’s a hyena, not a wolf).  These incredible animals are sometimes called the “scourge of the Serengeti”, but they play an important role here: cleanup crew!

Striped hyenas have broad heads with dark eyes, thick muzzles, and large, pointed ears.  Their muzzle, ears, and throat are entirely black, but their coats may be golden yellow, brown, or gray with black stripes on the body and legs.  The golden yellow, brown color helps the stealthy hyena camouflage well in tall, dry grass.  The most striking feature on the hyena is their legs.  They are much shorter then the front legs, giving Hyenas their distinctive walk, like they’re always limping uphill.  Don’t let the limp fool you, Hyenas are very agile and can run, trot, and walk with ease.  In addition to their speed, they also have several other keen abilities that make them formidable opponents.  Hyenas can hear sounds that humans cannot, and they listen for sounds from other predators that may lead them to a kill that is miles away.  They also have a built in communication system: an anal scent gland to mark it’s territory, and each hyena leaves its own unique scent.

One of the most prominent features on the Hyena is their massive heads and strong jaws filled with huge teeth used to crush bone.  Their powerful jaws and strong teeth are a sign of their carnivorous diet.  They are typically scavengers, but some Striped Hyenas may prey on sheep, goats, donkeys, and horses.  True to its scavenger nature, the hyena eats mammalian carrion whenever possible.  Its massive jaws help the hyena crush and swallow bones, teeth, horns, hooves, all body parts that other predators leave uneaten.  The hyena’s digestive system has adapted to maximize the nutritional value of animal remains; only the horns, hooves, and hair will be regurgitated.  Let’s hope this one doesn’t bite down too hard on the little pup :).