Around 73 million sharks are murdered every year mostly for their fins. This is approximately 6 millions every month, 1.5 millions a week, 217,000 a day, 9,000 an hour, 150 per minute.
The fin trafficking involves taking the fin in a brutal way while they are still alive, throwing them back to the sea and letting them die drowned in a slow and painful death.
Of the hundred of millions sharks murdered every year, 1/3 are in danger. The huge demand of fins come from the East and Southeast of Asia, specially China and Japan, where it’s used for the shark fin soup.
With the government pressure to prohibit the fin trafficking, the problem has created a controversy between activists and conservationists.

Bush Warriors will always support organizations that are willing to make a change and to educate for conservation. For this, it’s a great pleasure to present to you the organization of the day: Shark Aid International.

Shark Aid International it’s an international shark awareness, education, protection and conservation organization.
They started February 2012 and have grown into one of the leading shark conservation organizations. They make presentations at schools to educate children with interesting and educational ways to learn the truth about sharks. Also they work on independent and collaborative global campaigns to directly help in the research and protection of all shark species.

The founder and director is Alex Wright, a young English entrepreneur and excellent human being who has loved sharks since he was a toddler.
He loves animals and diving, and it was at an immersion in South Africa where he finally faced his favorite, the great White.
There he noticed that he could not longer be only a fan, he knew that he had to fight for their protection.
Currently, they are only two working at the organization, but they are willing to work with anyone who wants to get involved.

Their goal is simple, create awareness and educate people for conservation and protection of the shark species and end their bad reputation.
They work through social media and public events and collaborate directly with research projects and with other important organizations like The Great White Shark Advocacy, commended by EU Department of Fisheries for their strategies and work on providing educational materials in school. They also helped to gain protection for 4 species of shark at CITES 2013 with over 4000 signatures and international support.

Humans have caused a steep decline in shark populations around the world primarily due to nets, catch-and-kill fishing, longlines and shark finning.
The reality is that the shark is in danger.
Sharks are completely misunderstood, they are not the killing machines that the media has created.
We have the responsibility to protect them and grow the population of this great predator that contributes to the balance of the ocean.

Please support this organization, let’s fight for this magnificent predator.

Alex and team, thank you so much for your wonderful work, it’s an honor to be accomplices in this job as conservationists. 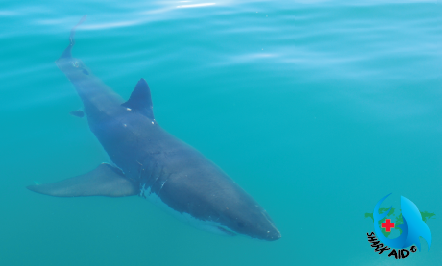