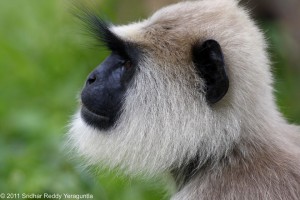 Grey Langurs are a genus of Old World monkeys once thought to be a single species.  Seven distinct species are now recognised, and are widespread throughout the south of Asia.  They range from Kashmir in north India and the Nepalese, Bhutanese, and Tibetan Himalayas, east to Bangladesh and west to Pakistan’s Indus Valley.  They may also occur in Afghanistan.  The most northerly species are generally larger and heavier than the southern Langurs, and they walk with their tails pointing forward, while southern Langurs point their tails backwards.  Grey Langurs, with their black hands and face, are also known as Hanuman Langurs after the monkey-god, and so are considered sacred in the Hindu religion.  They are large and fairly terrestrial, inhabiting forest, open lightly wooded habitats, and urban areas on the Indian subcontinent.  They are the most widespread Langurs of south Asia.

Grey Langurs are largely gray (obviously), with a black face and ears.  The species may vary tremendously in the darkness of hands and feet, and the overall color and presence or absence of a crest.  There are also significant variations in the size of the Langur depending on the species, but the head-and-body length of males is typically gets up to 30 in (75 cm) and 26 in (65 cm) for females.  The average weight is 40 lb (18 kg) for males and 24 lb (11 kg) for females, but the heaviest Grey Langur ever recorded was found in Nepal, and weighed in at 58 lb (26.5kg)!  Langurs mostly walk on all fours, and spend about half their time on and the ground and the other half up in the trees.  Langurs can leap 12-15 ft ( 3.7-4.6 m ) horizontally and 35-40 ft (10.7-12.2 m) downward.

Despite their great adaptability, Grey Langurs are in trouble, largely due to habitat loss.  While many populations of Gray Langurs are stable, in some areas they are declining, and both the Black-Footed Gray Langur and Kashmir Gray Langur are considered threatened;  the Kashmir Grey Langur is the rarest species of Gray Langur, with less than 250 mature individuals remaining.  Langurs are most prevalent in India, where their numbers hoover around 300,000.  India has laws prohibiting the capture or killing of Langurs, but these laws are difficult because many people don’t know they are protected.  The natural habitats of Gray Langurs is threatened by encroachment and plantation, as well as slash-and-burn agriculture.  Since they often live in populated areas, Langurs can be found near roads, and are often the victims of automobile accidents.  Though they are considered sacred in the Hindu religion, some groups from different religions hunt the Langurs for medicinal purposes, and to create amulets.