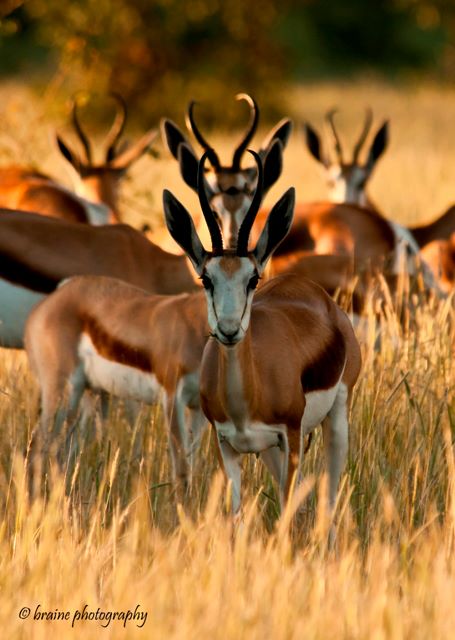 The Springbok, or Springbuck, is an antelope of South Africa, resembling the gazelle.  When a springbok is frightened, it springs stiff-legged into the air and races off (hence it’s name).  The springbok is about 30 inches (76 cm) high at the shoulders.  Both male and female have ringed, lyre-shaped horns.  The coat is cinnamon brown above, white below, and has a dark brown streak on each side.  Springboks feed on such plants as grasses and shrubs.  They were once found throughout southern Africa but were killed off in large numbers because they were destructive to crops.  Many were also killed for food.  The springbok is one of the national emblems of South Africa, and is the mascot for their national rugby team.

The springbok is Antidorcas marsupialis of the family Bovidae.  The marsupialis in it’s name derives from a pocket-like skin flap which extends along the middle of the back from the tail onwards.  When the male springbok is showing off his strength to attract a mate, or to ward off predators, he starts off in a stiff-legged trot, jumping up into the air with an arched back every few paces and lifting the flap along his back.  Lifting the flap causes the long white hairs under the tail to stand up in a conspicuous fan shape, which in turn emits a strong floral scent of sweat.  This ritual is known as pronking from the Afrikaans, meaning to boast or show off.