The Southern White Rhino was considered extinct until 1895, when a small population of less than 100 individuals was discovered in South Africa. Thanks to a century of conservation efforts, researchers and concerned individuals (especially in South Africa) the Southern White Rhinos population has recovered to approximately to estimated 15,000-20,000.

White Rhinos are confined to private ranches and heavily protected areas; however, poaching remains a threat. 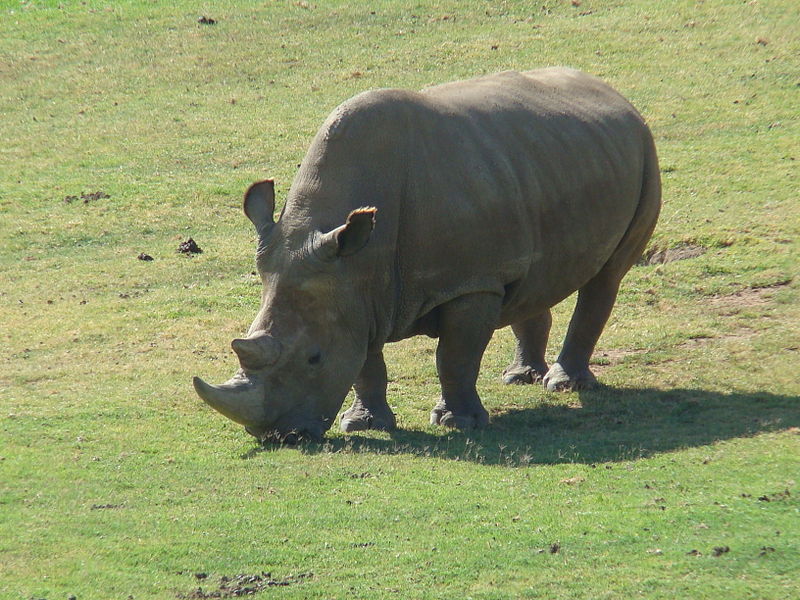 The last four Northern White Rhinos remaining in the wild were feared to have been killed for their horns.  In December 2009, four of the world’s only known eight Northern white rhinos arrived in Kenya to begin new lives at Ol Pejeta Conservancy – the last hope to save this critically endangered rhino subspecies.

The White Rhino has two horns comprised of compressed keratin – basically hair and fingernail material. The Northern White Rhino’s front horn is generally 37″ – 40″ long, while the Southern White Rhino’s can reach 79″. The rear horn of both subspecies is smaller, reaching 22″ in length.

The White Rhino is actually not white in color; the name is thought to be a result of mistaking the Afrikaans word “weit” (meaning “wide”) for “white.” The White Rhino is grey, although he or she often looks brown due to being covered in mud after wallowing.

The White Rhino is most readily identified by its square lip, and is also known as the Square-Lipped Rhinoceros. The square lip is used for grazing on grasses. While looking at the rhino’s head, you will see eyelashes and a little bit of hair on the ears. The other area where the White Rhino has hair is the tip of the tail.

Like all rhinos, the White Rhino is an odd-toed ungulate, having three toes – each with a sturdy hoof-like nail. Also in common with other rhinos is a superb sense of hearing, keen sense of smell – but relatively poor eyesight.

Size of the White Rhino

The White Rhino, along with the roughly equal-sized Indian Rhino, is the largest species of land mammal after the elephant.

Despite their large size, the White Rhino can run 30 mph for short distances.

White Rhinos eat and drink both during the day and at night, spending the hotter part of the day sleeping in the shade or enjoying a good wallow.

White Rhinos can live up to 50 years.