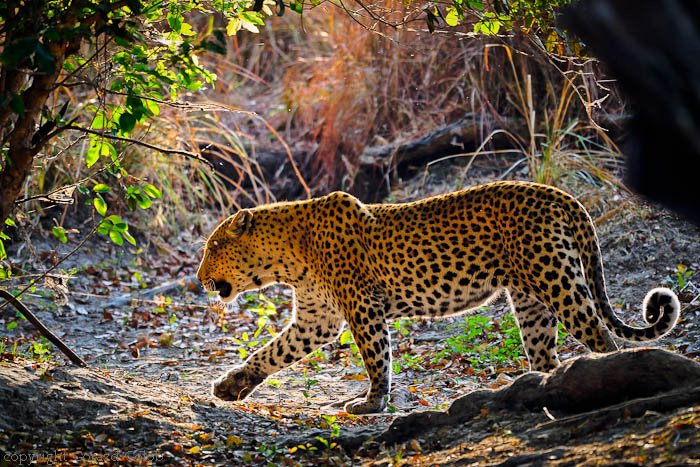 Today’s winning photo comes to us from Kafue National Park in Zambia, Africa.  Perhaps best known for housing one of The Seven Wonders of the World, Angel Falls, Zambia also offers us an incredible Safari wildlife experience!  Here we catch a rare glimpse of an adult African Leopard (Panthera pardus) roaming the thick African brush.  The Leopard is the most secretive and elusive of the big cats, and it’s rarely seen or photographed in this light.  The strongest climber of the big cat family spends most of it’s days high up in the trees, sleeping away a whole 2/3 of it’s lifetime!  At night, this powerful beast descends down to the jungle floor for dinner.

The leopard was once distributed all across eastern and southern Asia and Africa, from Siberia to South Africa, but its range of distribution has decreased radically because of hunting and loss of habitat.  It is now chiefly found in sub-Saharan Africa, though there are fragmented populations in the Indian subcontinent, Sri Lanka, Indochina, Malaysia, Indonesia, and China.  Its habitat ranges from rainforest to desert terrains.  Because of its declining range and population, it’s listed as a “Near Threatened” species on the IUCN Red List.

Compared to other members of the Felidae family, the leopard has relatively short legs and a long body with a large skull.  It is similar in appearance to the Jaguar (Panthera onca), but is smaller and more slightly built (the Jaguar is the smallest of the four “Big Cats”).  Its fur is marked with rosettes similar to those of the Jaguar, but the Leopard’s rosettes are smaller and more densely packed, and do not usually have central spots as the jaguars do.  Some Leopards and Jaguars are born completely black or very dark, and there are known as black panthers (a melanistic color variant).  The species’ success in the wild is in part due to its opportunistic hunting behavior, its adaptability to habitats, its ability to run at speeds approaching 36 mph (58 kilometres per hour), its unequaled ability to climb trees even when carrying a heavy carcass,and its notorious ability for stealth.  The leopard consumes virtually any animal that it can hunt down and catch.

We really love how the Leopard just pops right out of this photograph, accentuating all of the beautiful lines created by it’s powerful slinking body.  There’s an electricity flowing around this animal, which contrasts with it’s slow, creeping, almost stalking like pose.  The foliage behind the Leopard provides a nice frame, and a round lens or looking glass for us to enjoy it through.  The beam of light above it’s head evokes a magical touch that compliments the mysticism and wisdom often associated with the Leopard in many native tribes.