Mozambique was torn apart by civil war in 1977.  During that war, 1,000,000 people died as well as almost the entire zebra, buffalo, and hippo population due to cross-fire killing. About 95% of the large animal population was decimated in Gorongosa National Park in addition to the rampant poaching to fund the war effort.  This in turn drastically affected the overall ecology of the region as some of the major players were no longer there: vegetation grew, birds lost their nesting habitat, fires began much more common, etc.

The park was shut down and abandoned in 1983 as clashes between opposing forces waged on for another decade. However, a relocation program was implemented in which elephants, buffalo and hopefully soon, other animals will be reintroduced into the Gorongosa National Park.  A group of scientists are trying to save this park and the species that used to be there so that another chunk of their only remaining  territory is not lost. Led by the US based Carr foundation, in collaboration with the government of Mozambique, the foundation invested about $10 million into the parks restoration between 2004-2007. Due to the rapid success of the three year project the government of Mozambique and the Carr foundation agreed in 2008 to sign a 20-year agreement to restore and co-manage the park. Today thousands of visitors visit the park annually which is open from 6am – 6pm. A hippo and wading birds back in Gorongosa National Park. 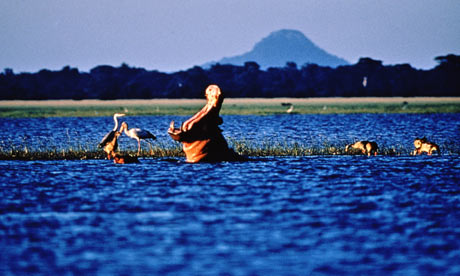